Tomorrow, I’m going to participate in the fifth edition of PyWeek. PyWeek is a challenge in which participants must develop a video game in one week using Python. I like the idea because it brings a possibility to finish a project and have some fun by the way.

Some of the games created during PyWeek are really awesome. It’s amazing the fact that they were made in only one week. My favorite games of previous editions of PyWeek are:

I also like the competition and challenge feeling that you can breath in PyWeek.s

It’s possible to participate in two categories: Individual and Team. This time I am going to participate as Individual. I am thinking in use PyGame only. Even when some people are talking about Panda3D. I also want to use Blender to create pre-rendered sprites. I have been learning it secretly for a while. The result has been exactly what I expected: I suck as a graphic artist. My models are absolutely ugly, but at least I can do something for a game. By the way, now I prefer Blender to Wings3D for 3D modelling.

Screenshots of my attempt to model an aircraft with Blender. I also tried some kind of cell-shading or toon-shading redering: 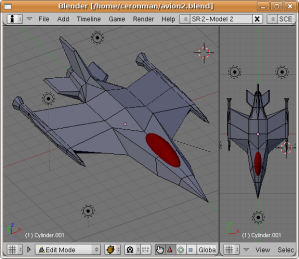 If I suck with Blender. I prefer not even talk about my talent with sounds and music.

See you in one (py)week!

View all posts by ceronman